Another weekend, another beer festival, this time a short train journey away, in Wakefield at the Light Waves Leisure Centre.

A short walk up Westgate took us past The Black Rock, thinking it rude to pass by without popping in, an excellent pint of Tetley’s was enjoyed – Two guest beers were available as well. Suitably refreshed we descended on the beer festival.

Four pounds entry (free for CAMRA members), including a NON-REFUNDABLE festival glass (Two pounds for CAMRA members)…. Didn’t I read somewhere that glasses at all CAMRA festivals should be refundable? Then tickets for beer, priced at 1.20 each which we were told would buy a half. Imagine our surprise then when some stronger beers were a token plus 10p or even 20p.

A good varied selection of beers on offer from the sublime Jaipur IPA (Thornbridge) and Dark Ruby Mild (Sarah Hughes) to the reasonable Hill Climb (Prescott) and the downright awful (cant really say but it was poured down the sink in the gents). 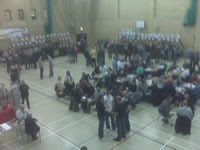 Even though I’m not a great fan of beer festivals in large sports halls – they always seem to lack atmosphere – I understand that it must be difficult to find large enough venues to hold a beer festival in. All in all a pleasant enough afternoon but it did raise some questions:
Why don’t CAMRA instigate a beer festival policy so there is consistancy around the country?
If a festival is charging different prices for the beers, why don’t they have a better method for buying them?
Festival glasses, refundable or non-refundable?

Brewtown Brewery Tours 2017 launch A lot of nice invites land in my inbox and the one from Mark at... read more

Historical beers to be revived as part of Manchester Beer Week Long-forgotten beers from Manchester’s past are set to be... read more